We are extremely lucky to have a wealth of senior Aikido instructors resident in Victoria, many of whom also train and attend events as students themselves. Click on a profile to learn more about their history and where they usually teach. 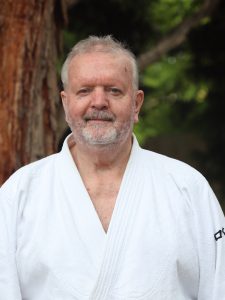 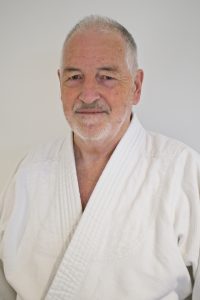 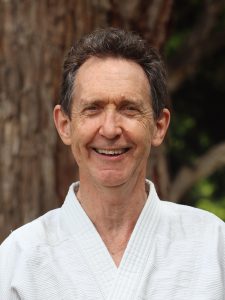 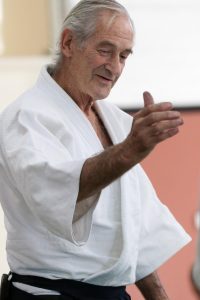 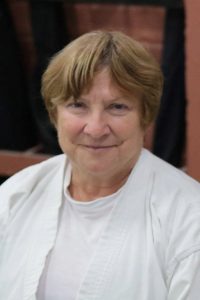 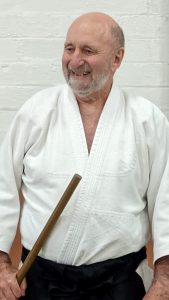 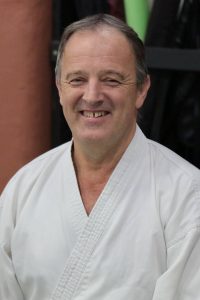 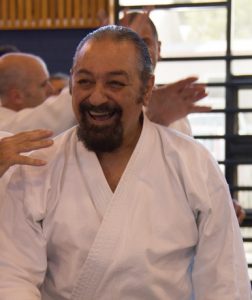 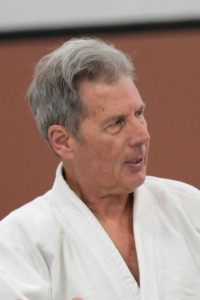 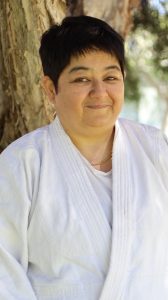 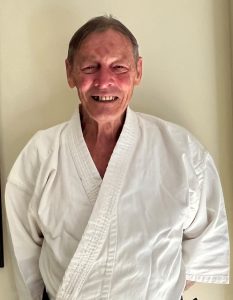 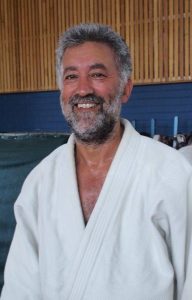 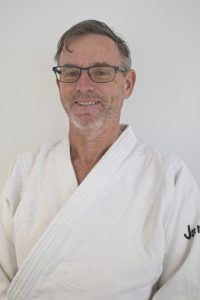 Robert Botterill Shihan began training in 1965, at the age of 18. It was one of several martial arts that he was studying, all with different characters and styles. After about 10 years, he gave them all up, except Aikido, because, as he said, “it’s me”.

He has described Aikido as an ultimate martial art, “because you have to accept both authority from above, and responsibility for juniors.”

“So that changed all of my life because that meant I changed how I talked to people, how I did business…(I became) less competitive with other people, more cooperative with other needs and people…”

His memories of Sugano Sensei include Sensei demonstrating suwari waza, with an effortless and natural power. This was very different to the Karate spirit that Botterill Shihan had studied in earlier years, which focused on power and aggression. From Sugano Sensei, he gained a sense of the meaning of cooperation.

Botterill Shihan became one of the first three Australian Shihans in 2008 and was awarded the rank of 7th Dan in 2011. With this position in the organization, he now thinks in a global sense, focused on the direction that international aikido will take in the future.

John Rockstrom Shihan began training in Judo at the age of 14, and by age 16 he was in Japan studying Judo, Kendo and traditional jiu jutsu full time. He also spent a period studying Korean Judo, training with their Olympic team.

He began his study of Aikido with Sugano Sensei in 1970 and after a period of a few years devoted his whole time to Aikido, forgoing the other forms previously trained. Aikido has remained his first love and interest to today, but along the way he found time to study Muso Shinden Ryu iaido for a number of years and Wing Chun Kung Fu. As an adjunct to the martial studies and to better understand Japanese philosophy and ways he spent over 10 years practising Urasenke chanoyu, tea ceremony. John Sensei freely admits he understands very little of any of these forms but firmly remains an active student of martial studies, with a major in Aikido.

Rockstrom Shihan regularly teaches at Mornington and at Special Days of training.

Felicia Birman Sensei began Aikido in 1974. For her, it has been the longest thing that she has done continuously in life, so it has formed a constant that she cannot imagine living without. “It’s just been something that I’ve always wanted to learn more about, and it’s taught me a lot about myself I guess, and other people…”

“Perhaps it’s mellowed me a little bit, made me more responsive to people… I mean, it’s a journey.”

She feels very strongly the privilege that is afforded to Australian Aikido to have Sugano Sensei as our Shihan. She describes him as a kind and decent human being, and recalls his words when asked what the most important thing that a teacher can do for his students – “to be kind to them”.

“He’s a terrific teacher and a terrific inspiration, but he’s also a really kind human being… and he’s always been somebody that is not showy. He’s just normal, natural… he’s a good man, and I think we’re very honoured to have him as our Sensei.”

Birman Sensei was awarded her 6th Dan in 2008. Felicia looks forward to the ongoing challenge of applying Aikido to everyday life where personalities and egos get in the way. For the future of Aiki Kai, she hopes that more younger people become part of the organisation, as she sees it as becoming older at the moment. She wished that Sensei could be around for ever, “because I can’t imagine Aiki Kai without him.”

Birman Sensei teaches at Special Days of training and is a regular student at Clifton Hill dojo.

He believes Aikido has changed his life: “Well, in relation to people, it’s made me accept the differences in people more. You know someone about your size might have made comment about we’re eccentric, but I don’t see it as eccentric, we’re just different. Really, everybody comes from different lifestyles, workplaces, some with long hair, straggly beards, and I used to have the idea that people who didn’t conform were a bit different and to be wary of them, but I have become more aware, that I’m more liberal — what would be the right word? — I accept them for what they are and not what they look like.”

Oldman Sensei was particularly impressed by Sugano Sensei during his early training: “The 1st year that I was training I used to go to Monash and he came down for a weekend. I believe that the technique was Ikkyo but I finished up with bruises all along both wrists because obviously I was doing it incorrectly. But he used to join in with bokken work and we were doing a routine once where I had to cut, take the head off and turn, but when I turned he was already waiting and came towards me, and I felt it. Physically I felt it, and I was very impressed. That was in the first 12 months of training. It was a wonderful feeling.”

At this stage of his training: “Well, I think at my age I’m just glad to be on the mat. How many other martial arts have people in their 60’s still training? At a slower speed of course, but I like the way the younger people are training, because I think I trained physically for so many years, and these young people have so much skill now that I just didn’t have after many years of training that they have now and I think they’ve improved. They’ve improved the quality of Aikido I feel. I’d hate to think of what I was like when I was young… so physical… Oh really, it was terrible, when I look back on it.”

He has said that Aikido has had a profound effect on his life because “I think with Aikido, you realise it is something you can do for the rest of your life. In Australia when you’re thinking about sports you sort of think about young people who give the game away… but with Aikido you just continue to develop throughout your life, and there’s that much more to understand. I think O-Sensei was quite correct when he said he was just a 1st year student in Aikido… because it has many mountains to climb and many hill tops.”

Among his more than 30 years of impressions of Sugano Shihan: “It’s his presence. When he’s around there’s more direction, there’s more focus… it’s more of an overwhelming thing that’s there. Otherwise there’s Aikido, but when he’s around you really are more focused and you really try and be attentive and listen to what he’s got to say because he’s got such knowledge… and we were so lucky having a person like him that we can follow.”

And on Aikido’s future: “I do get a kick out watching other people develop… to see the young people come through and see their progress. I mean, I realise I’m still developing myself.”

He developed an interest in aikido after having discovered yoga and, having learnt that there was a class in Darwin, he went along to watch. He became very interested in the movements and enrolled as a student. He was graded to 5th Kyu in 1977.

He then spent all of 1978 back-packing in Asia, and during 1979 and into 1980 lived in Byron Bay, NSW, where there was no aikido. He did, however, find the Singapore aikido dojo during his travels, and stayed there for 2 months training every day, and learnt a lot from Harry Ng, chief instructor.

Later in the year, he visited Tokyo and enrolled at Hombu dojo, and trained for a few weeks. He went up to Iwama, mainly just to have a look at the training there. He ended up staying just over 3 months. He trained every day and sometimes twice a day. Saito Sensei’s instruction was very clear and he learnt a lot including the importance of jo and bokken training.

Johns Sensei returned to Darwin in 1980 and recommenced training with Richard Barnes Sensei, and in 1984 was graded to Shodan by Sugano Sensei.

Since then, Johns Sensei has attended just about every Summer School and some Winter Schools training under Sugano Sensei and other senseis he invited to Australia including Osawa Sensei, Yamada Sensei, Doshu, as well as senior Australian senseis.

Sugano Shihan has been the major influence on Brian, and as an instructor, Johns Sensei aims to pass on his teaching.

Johns Sensei regularly teaches at St Albans and at Special Days of training.

Peter Morgenroth Sensei began studying martial arts in 1954. In the late 1960s, he first met and studied Aikido (Yoshinkan) as an employment requirement. He migrated to Australia and, in 1980, met Sugano Shihan and studied with him until his death in 2010.

He started RMIT (Royal Melbourne Institute of Technology) Aikido in 1981 and taught there until 1997. He established Kahama Dojo in the late 1980s.

In 1990, he wrote a book entitled Posture and Power in the Martial Arts – an exposition of body mechanics, force generation, and associated topics. At the time of this writing, his primary focus of interest in Aikido is upon the interaction of physiology and body mechanics in Aikido technique, and upon economy of movement (now ‘forced’ upon him by age – old man’s Aikido). He developed multiple-day seminars on these topics and delivered them in Australia and overseas to Aikido and other martial arts organizations.

He was admitted to rokudan at the Kagami Biraki (New Year) ceremony in 2015. His primary teaching focus is upon helping new and junior students to establish appropriate habits of movement and posture.